Looking at the dataframe of unusual occupancies from yesterday, I’ll put each record into one of four categories, in order to more easily see which records are definitely wrong, which are questionable, etc.

We can see, for example, that all the definitely-wrong negative-occupancy records are from SouthGate General - maybe the council should look into upgrading the sensors there…

We had another Bath ML Meetup tonight - we didn’t have too long to talk about the project, but plans are being made…

Using the dataframe from yesterday, I’ll have a quick look at when the particularly dubious records - the overfilled and negative records, that is - are generally recorded. I’m curious as to whether, for example, overfilled records are more common at lunchtime than overnight. 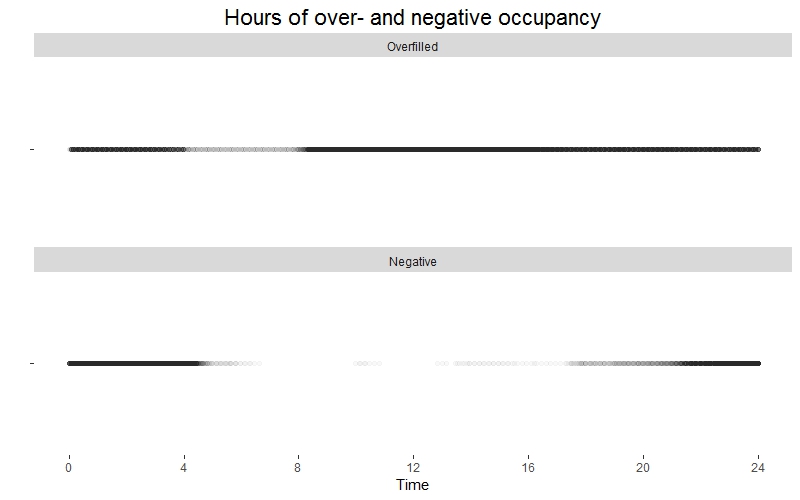 As it turns out, the overfilled records are spread over the whole day, with a decrease only in the early morning. Negative records tend to be from overnight, although there are some during the day too.

Yesterday’s plot revealed a small cluster of points at around -15000. Let’s have a more detailed look at these points, and see if we can work out ‘how’ they are wrong - for example, if they are all the same value, which might suggest it is a deliberate ‘indicator’ value used by the council to denote a closed car park.

So all of the points in this group are from SouthGate General CP, they span a range of values, and they were all recorded within a 2-hour period. Let’s have a look at the trend of these records. 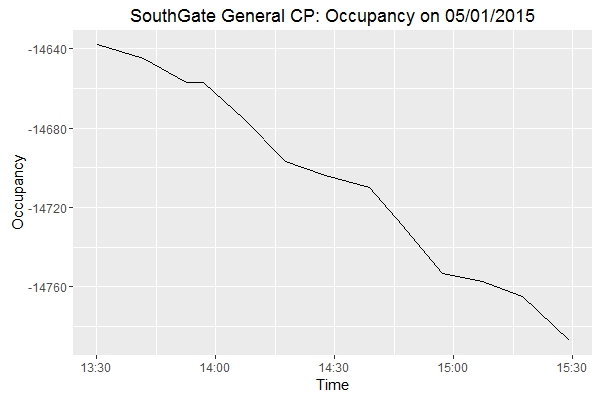 According to the records, the car park is emptying over this period - but the difference between 13:30 and 15:30 is only around 150 cars, which is a reasonable change over that period of time.

Perhaps there was an unexplained, but precise, shift of -15000ish in the Occupancy records for this brief 2-hour period - in which case the data might be salvageable…

Now I’ll get the dodgy records from 05/01/2015, shift them by adding a constant to each (initially 15000 - an educated guess), and combine these in a dataframe with the averaged records. 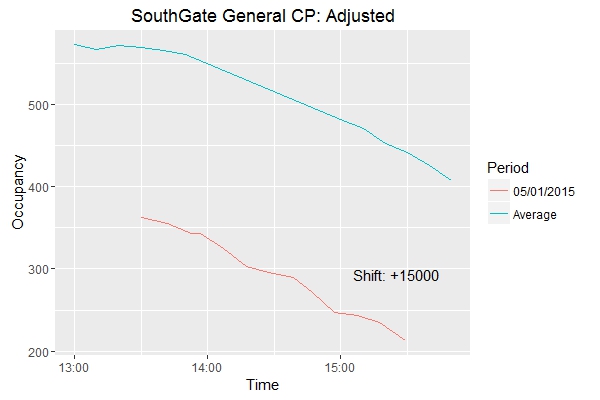 We can see that the shifted records do indeed follow the same pattern as the averaged records. A small adjustment to k confirms this. 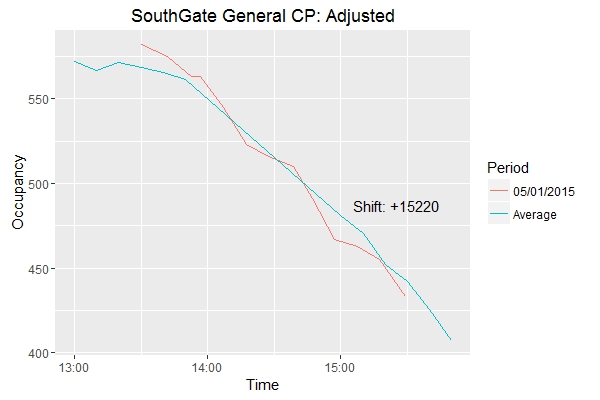 To be completely honest, when I started this project just over 2 weeks ago I didn’t know how I would even get this far without running out of ideas. Here’s hoping I can keep it up for another 15 days!